I have to think that the new post formats on Facebook which let you make your status update A HUGE FONT ON A COLORED BACKGROUND represent the ultimate antipattern and the death of good design at the hands of metrics-driven optimization.

They surely exist because so many A/B tests over the years made pieces of Facebook’s UI bigger, louder, and more image-heavy because all those changes encouraged more clicking and addiction and “engagement.”

Then one day someone at Facebook observed that everyone had stopped doing what they’d signed up for in the first place: reading the status updates their friends posted.

So of course this modern day Picasso decided to make status updates BIG AND SHINY AND BRIGHT RED too!

Gone through 11 of these tests so far. 🙂 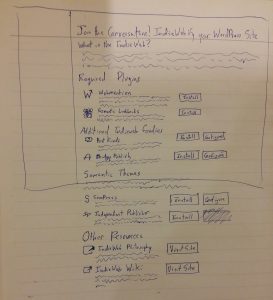 Some ideas I threw together for an updated Getting Started screen. Introduces the user to the IndieWeb concept, presents prominent next steps for ‘Indiewebifying’ their site and learning more. Eliminates the need for the Extensions page.

Update: I did a rough sketch of an alternative Getting Started UI for the IndieWeb WP Plugin which addresses some of these issues.

This is my experience “indiewebifying” my personal WordPress site.

A user test from a “Gen 1” UX guy who just heard about this stuff last week.

Hopefully none of this comes across as too critical. I am REALLY impressed by what is already working.

*** Humble suggestion: user should get a notice when they publish that the post has been syndicated to {Facebook, Twitter, etc.} and will appear there in a few minutes.

*** Humble meta-suggestion: I suspect Brid.gy supports many more use cases than the WP-to-FB case I walked through today. Perhaps Brid.gy config chould be exposed through a RESTful API, delegating the UI question to the consumer (in this case the WP Indieweb plugin). Consumers of the API could then provide UI which is more contextually relevant.

Still todo: Set up FB comment syncing. Figure out if I can make posts on my site friends-only (!). (I know “privacy” on Facebook is at best security through obscurity, but that doesn’t make it useless. I don’t run ssh on port 22 either. I don’t want what I post to be world-readable by default.)

*** Last thoughts: That was easier than I expected! I didn’t run into a single part of the process that was really buggy or broken. Just a lot of UX nitpicks. What has been achieved so far is really impressive, it’s amazing that this stuff just worked without exploding once it was all authorized.

From a UX standpoint IMO my biggest hangups were:

1) At several points during the onboarding experience there was no clear next step. Users always look for a prominent button/banner/etc. which tells them what they need to do next to accomplish their task. Adding these at points in the workflow where they don’t currently exist is probably the easiest way to increase the number of people who onboard successfully.

2) Being confronted by a ton of plugins which all have obscure purposes. Consolidate these into one plugin or handle installation and activation behind the scenes when the user starts to configure a specific feature.

3) Having to jump out of the WordPress UI and go to another site to set up Brid.gy. Wasn’t actually told anywhere that I needed to do this, so if I hadn’t been furiously absorbing info from community resources for the past few days, I would never have figured it out. Keep the user in WordPress as much as possible while configuring Brid.gy.

Playing with https://brid.gy/ and Webmention plugins for WordPress. Pretty cool!

If there are two things we need to do to preserve the free and open Web right now I think they are 1) liberate the social graph and 2) provide a robust alternative business model to advertising. I was surprised to learn today that Tantek Çelik is now one of the co-chairs of the W3C’s Social WG! Tantek was one of the key guys involved in making Mac IE the best browser in the world during the early aughts, I met him once or twice in my early days as an MSFT intern and the dude was super smart. I need to learn more about this WG’s work.

Well, if you always wanted to watch “Animal Stories from Quran,” make sure you fly Lufthansa. #paidforbyswissair

Wow London has been hit again.

OK, when a hotel offers FREE laundry service, I am truly in love!